Can Expats & Immigrants Really Vote in Germany? And How?

Election time is just around the corner and there’s not a soul in the city that isn’t aware. You’ll find political flyers and banners hung on every lamp post in Düsseldorf – CDU, SPD, AfD, DFP, Die Grünen, Volt, you name it, you’ll find it!

Every time elections come around, even though I know I’m not legally allowed to vote in Germany, I still get a boost of excitement knowing that change (hopefully good change) may be right around the corner.

This year, I received a polling card in the mail for elections and was a little confused. Did any of you receive this letter too?

I knew I wasn’t able to vote in this year’s elections as a non-EU immigrant, but what was I being invited to vote for then?

Can expats and immigrants vote in Germany?

Those with German citizenship have the right to vote in Germany, but are we as expats and immigrants also allowed to vote? Well, if you are an EU citizen, you are able to vote in two of the elections:

The overall rule in Germany is that non-EU citizens are not allowed to vote. However, we are still able to vote for the members of the Integrationsrat.

Aha! That’s why many of us as expats and immigrants have also received polling cards in the mail. We can vote for the members of the Integrationsrat.

As an expat or immigrant, in order to vote for Düsseldorfs Integrationsrat you need to:

If you meet all of the above qualifications and haven’t received your polling card in the mail (at least 3 weeks before election day), make sure you contact the Electoral Office (Amt für Statistik und Wahlen) to make sure that you are added to the registered list of voters.

What does “Integrationsrat” mean in English?

This council works together and directly with the members of the Council of the City of Düsseldorf to make sure that our voices as expats and immigrants can be heard.

How can you stay updated on what our Integration Council is up to?

The Integration Council of Düsseldorf hosts public meetings in the Townhall every other month. You can check online to see when the next upcoming meeting is, as they are free to attend. Meeting minutes are shared online so if you can’t attend, you can also read up on what has been discussed.

Which elections are we not allowed to vote in?

EU and non-EU citizens living in Germany are not allowed to vote in the following elections:

Non-EU citizens living in Germany are also not allowed to vote in the following elections:

Now that I know what elections I can vote in, how do I vote?

If you are registered in Germany and have the right to vote in Germany, you will receive your voting card (Wahlbenachrightigung) in the mail in the weeks leading up to the election.

If you have not received your voting card 3 weeks before the election date, please make sure you contact the Electoral Office (Amt für Statistik und Wahlen) to make sure that you are added to the registered list of voters.

You will need to bring this card with you to the local polling location that is designated to you (the address of the poll station is located on your poll card in large font). If you happen to lose this poll card before election day, make sure you bring all valid forms of identification with you when you go an vote.

On election day, September 13, 2020, you are invited between the hours of 8:00 AM and 6:00 PM to vote at your local voting center (address as marked on your polling card).

Don’t forget to bring your polling card and a form of identification (passport and/or German ID card).

If you would like to vote per post, you can fill out a request to do some on the back of your polling card or by scanning the barcode provided on the backside. In order to make this request,  you will need to include: 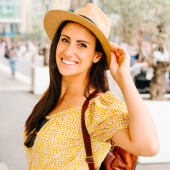 Jenna is a freelance travel writer, social media consultant, and marketing manager. Born and raised in Toronto, Ontario, Jenna swapped her Canadian lifestyle for the city life in Düsseldorf, Germany back in 2014. Would you like to be a guest author on Life in Düsseldorf? Send us a message at hello@lifeinduesseldorf.com.

Almost 50% of Shoppers Prefer Online Pharmacies in Germany | Why?

A Sneak Peek into an Average Salary in Düsseldorf | How Much Should You Be Making?

The Complete Guide to Neighborhoods in Düsseldorf | Which One is Right for You?