The oft-spotted Düsseldorf cartwheeler symbol has become entwined in the long list of fables and traditions that surround the city. This jovial figure, a person mid-cartwheel, would be strangely more recognizable to some tourists than residents, as the Cartwheeler has become a regular feature in souvenir shops and is always talked about on the cities most popular tours.

One can adorn their keys with a plucky keyring version or opt for a larger memento. However, the Cartwheel’s influence on the city transcends the assorted trinkets. Keep your eyes peeled – cartwheel symbols are dotted all over the city from the cover of manholes to the door-knocker of St Lambertus’ Church. In 1954, a fountain was established in Burgplatz, capturing the gleeful moment an onlooking child prepares to cartwheel while watching a friend master the movement.

How did this motion, famously associated with carefree youth and gymnastics, become entrenched in the culture of the city? Like many wacky traditions, the origin of the Düsseldorf’s appreciation for the humble cartwheel remains inscrutable.

Several myths exist to attempt to explain how the Düsseldorf cartwheeler cemented itself into the story of the city. One includes a very patriotic youth who, depending on where you seek the information, either cartwheeled in place of an actually broken wheel of a cart or held it in place when the cart of a royal couple experienced difficulties en route. Other reports depict the antics of a cartwheeling child who brought joy to the morose bride on her big day. Who this couple is remains up for debate as there are two potential noble pairs that could fill that position.

Perhaps more likely is the tale of 1288. It was in this year that the city we now call home 731 years later was awarded city rights by Count Adolf VIII of Berg following the Battle of Worringen. During the jubilant celebrations, children were apparently spotted expressing their joy in the only way they knew how – countless cartwheels.

There has historically been a competition in Düsseldorf to honour the freest of the free spirits that have mastered this now iconic move. With the first event taking place in 1937, it is now officially titled the Stadtsparkassen-Radschlägerturnier and is organized by the Alde Düsseldorfer Bürgergesellschaft 1920. 700 girls and boys from 15 nations, aged between 8-12, partake in this celebration of agility, athleticism, and tradition. It takes place down by the Rhine, offering plenty of space and vantage points for cartwheelers and avid fans alike.

You might also be interested in a Düsseldorf cartwheeler scavenger hunt, as you’ll find more than 100 cartwheeler’s (2 meters high and 2-meters wide) scattered around the city. This was an art project which began in 2001 by various artists and hobby artists. Today, you’ll find cartwheeler’s in different colours, different designs, and even different materials.

The inscription on the fountain in Burgplatz, designed by Alfred Zchorsch, is a quote from Hans Müller-Schlösser which contains the true message of the Düsseldorf cartwheeler:  “Radschläger wolle mer blieve, wie jeck et de Minschen och drieve – we’ll keep cartwheeling, no matter how crazy it makes people.” 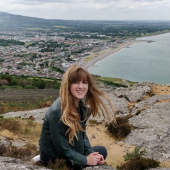 In September 2018, Caoimhe left the jagged shores of the west of Ireland for a new job in Dusseldorf. Having studied Business and German, she now assists Irish companies who are exporting into Germany. In her spare time, she can usually be found exploring her new home, Düsseldorf, or sipping a flat white and writing.

10+ of the Best English University Programs in Düsseldorf

What is a “Tagesmütter”? Here are Some Essential Facts to Help You Understand

7 of The Best Study Abroad Programs in NRW