You know how it is when you ask new parents about their babies and their eyes light up? Yeah, Blue Goat Theatre is like that for me! My beautiful, crazy theatre baby is now just over one year old. Ahhhh…they grow up so fast…

There are many different English clubs in Düsseldorf, but I’m here to tell you all about my baby, the Blue Goat Theatre.

Want to join the theatre group? No experience is required, but if you’d like to learn a little more before joining, there’s always tons of online courses for as little as 10 Euros.

What’s it All About?

With both our original plays and those by established writers, we are looking for shows that not only entertain but also include social commentary in some form. We want our audiences to have fun, but to also leave with some new ideas or perspectives to chew over on the way home!

We are also committed to promoting diversity and representation in our productions; casting plays that reflect the way society looks.

But really, what’s so great about theatre?

What I love about theatre is the contact between the audience and the actors. With film, you expect what you’re looking at to be true to the setting. In theatre, you take your audience into a darkened space and you say – this is an airport, or this is a forest, or this is a street. And at that moment the audience has to make a choice to go beyond what they know a street looks like and trust that you will show them your street, that you will make them feel the street or the forest or the airport and then, for a brief period of time, you can transport them to another world.

It’s reaching out your hand to a stranger and saying ‘here, let me show you’.

I always tell my actors that it doesn’t matter how many people you have in an audience, whether it’s one or one hundred. Every single one of those people has made a choice to be there rather than sitting at home on the couch watching Netflix in their pajamas! For the next hour or so they will turn off their phones and give you their full attention. That for me – especially in this age of easy distraction – is an incredible gift.

We have a full schedule coming up in 2020, kicking off with a new play in German – Männer-Legenden. This is a very powerful piece about toxic masculinity and the old wounds and legacies that come back to haunt us throughout our lives. This will be performed in Düsseldorf and Duisburg in March.

In May, we will be staging a new production of Cold Feet in English. Cold Feet is a play about three brides whose weddings aren’t going quite to plan. It explores life, love, and those niggling doubts we all have about the future. First performed in 2016, the play has been completely overhauled and we’re very excited about the revised version. Fingers crossed this one will also be touring in the middle of the year – more details to come.

We’ll be performing J’n’R in German at a Fringe Festival in the second half of the year. We’ve performed J’n’R for two years now in English and being able to perform it in both English and German has been a lot of fun.  J’n’R is a love story loosely based on the balcony scene from Romeo and Juliet but set in an airport at 4 am and without the ensuing sex and stabbing!

And finally, we have a brand new original production in English that will be staged in September. Stay tuned for more details on that one! (No it doesn’t have an official name because it’s still under construction! Nothing like a solid deadline to help get those words down on paper!)

We’ll also be running our very successful Improv Workshops in the second half of next year. These were run on a weekly class basis and also in corporate settings in 2019 and were extremely well received.

Where can I find out more?

If you have any questions or would like to talk about getting involved behind the scenes, you can send an email to info@bluegoattheatre.com. We’d love to have a chat! 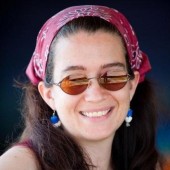 I’m an Australian writer who arrived in Düsseldorf (a bit accidentally) four years ago. In addition to my plays, I have published a novel, done lots of blogging and written for magazines and online publications. I have chronic wanderlust and have lived in seven countries on four continents and visited another 20 (I think? I don’t know…I’ve lost count…) If you want to know more about the book I wrote, or the book I’m reading, or what I’m currently ranting about, you can find me at www.fionajleonard.com.

10 of the Most Beautiful Bike Paths in Düsseldorf

4 Ways to Cancel a Gym Membership in Germany

20 of the Coolest University Courses Offered Online for FREE

How to Get Involved in Curling in Düsseldorf